ARPKD (Autosomal Recessive Polycystic Kidney Disease) occurs in approximately 1 in 20,000 newborns and children. 30% to 50% of infants with ARPKD die at birth or shortly after (this is mainly due to under developed lungs). Children who survive the newborn stage face many challenges including high blood pressure, lung issues and kidney/liver failure. Approximately one third of children with ARPKD will need dialysis or kidney transplantation before the age of 10. 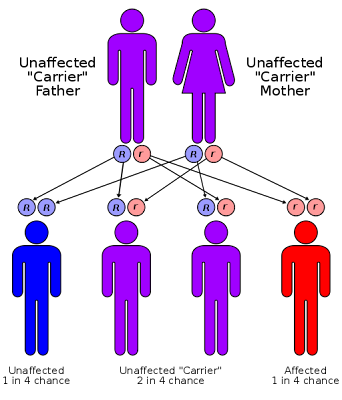 Here is an excerpt from the most frequently asked questions about ARPKD:
(The full list can be found at www.pkdcure.org)

Q
What is ARPKD?
A
Autosomal recessive polycystic kidney disease, ARPKD, is a rare genetic disorder, occurring in approximately 1 in 20,000 individuals. It affects boys and girls equally and often causes significant mortality in the first month of life.
If the child survives the newborn period, the chances of survival are good. For these children, approximately one-third will need dialysis or transplantation by the age of 10.
Q
What causes ARPKD?
A
In recessive disorders such as ARPKD, the child must inherit a copy of the disease gene from each parent in order to be affected. Since the parents each have only one copy of the disease gene, they do not have the disease and are referred to as “carriers.” For carrier parents, there is a 25 percent chance in each pregnancy that both copies of the disease gene will be transmitted to the baby.
Q
What is the kidney problem in ARPKD?
A
In ARPKD patients, small cysts form in the last section of the nephron called the collecting tubule. A cyst is a balloon-like widening of the tubule. In ARPKD, the abnormality always involves both kidneys. Due to the numerous nephrons with small balloon-like dilatations, the kidneys can become quite enlarged. In addition, the normal function of the collecting tubule is disrupted. In the normal kidney, the collecting tubule fine-tunes the amount of water and acid in the tubular fluid so that the body retains an appropriate amount of water and eliminates excess amounts of acid. In ARPKD patients, the cystic collecting ducts cannot retrieve water efficiently, causing much more urine production than in children with normal kidneys.
For ARPKD patients, the size of the kidneys and the degree to which their function is abnormal depends upon how many of the collecting ducts are cystic. For reasons that are not completely understood, the majority of ARPKD patients have a progressive loss of kidney function. However, the age at which kidney failure develops varies greatly among patients.
Q
Are only the kidneys affected in ARPKD?
A
ARPKD affects both kidneys and the liver. Affected children may have significant kidney involvement at the time of birth, meaning very enlarged kidneys and decreased urine production. In utero, urine production is a critical factor in maintaining normal amniotic fluid levels. When amniotic fluid levels are very low, lung development can be impaired. In some newborns with low levels of amniotic fluid, impaired lung development can result in serious breathing difficulties that ultimately can cause death.
Children with ARPKD often produce very large volumes of urine and must urinate much more frequently than children with normal kidneys. Given the kidney abnormality, urine production in ARPKD children does not slow down at night or even when liquid intake is limited.
About one-third of children with ARPKD who live beyond the newborn period will require dialysis and kidney transplantation by 10 years of age. High blood pressure is very common in children with ARPKD, and current information indicates that untreated high blood pressure can lead to kidney failure more quickly than if the blood pressure is kept within the normal range with medications.
Children with ARPKD also have the liver abnormality called congenital hepatic fibrosis that may lead eventually to enlargement of the liver and spleen. In the liver, the abnormality can impede the return of blood from the intestine to the liver. This condition, called portal hypertension, can lead to distention (varices) and increased pressure in the veins around the esophagus, the stomach, and the intestine. These varices can rupture, leading sometimes to life-threatening gastro-intestinal bleeding. In addition, portal hypertension can cause splenic enlargement and hypersplenism, with resulting low red blood cell, white blood cell and platelet counts.